Wine and the Space Odyssey 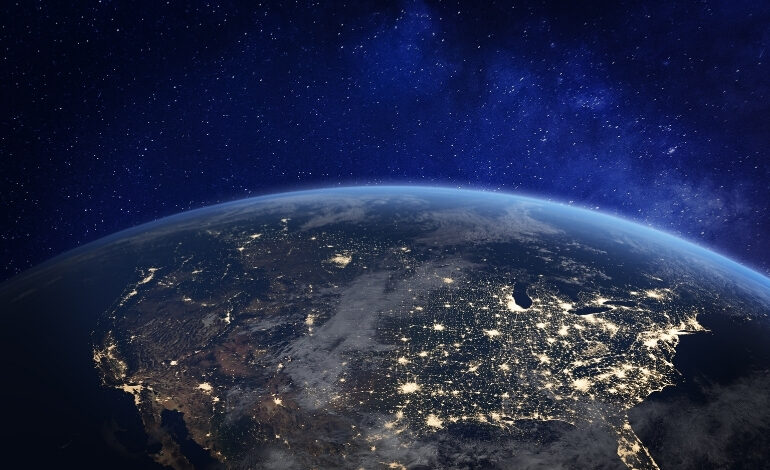 Bottles of Pétrus recently returned from an “expedition” aboard the International Space Station. A first? Not exactly. In 1985, a bottle of Château Lynch-Bages travelled around the world 110 times aboard the Discovery spacecraft.

Sometimes, navigators carry bottles with them during the Vendée Globe or transatlantic races. There is even a tradition dear to Jean Le Cam and Isabelle Autissier (among others), of pouring wine into the sea as a gift to Neptune when crossing the Equator.

However, in more recent times, another kind of adventurer has transported wine with them during their expeditions – astronauts. In November 2019, the Bordeaux start-up Space Cargo Unlimited, which studies the impact of microgravity on organic products, sent 12 bottles of fine Bordeaux wine on a 14-month trip at the International Space Station as part of a scientific expedition.

Returning to earth last January, the 12 bottles of 2020 Pétrus didn’t have the chance to meet Thomas Pesquet, but they did produce interesting findings! On 14 January, the precious cargo was entrusted to the care of 12 oenologists and scientists at the Institute of Vine and Wine Science (ISVV) to reveal the secrets from its journey in outer space.

During a comparative blind tasting of a bottle that had just completed its space odyssey and the same bottle which had remained on earth, experts observed that the space wine displayed interesting sensory characteristics and its colour had evolved towards brick-red highlights, suggesting more pronounced ageing, as if in space, ageing happens faster.

Thanks to the success of this experience, these 12 Pétrus bottles will certainly not be the last to leave the earth’s orbit. But they are not the first either.

Over 35 years ago, a small bottle of 1975 Lynch Bages was a pioneer. On 17 June 1985, it took off from the Kennedy Space Center aboard the Discovery space shuttle alongside astronaut Patrick Baudry. Jean-Michel Cazes, owner of this Pauillac Grand Cru Classé, vividly remembered this moment: “The whole family had travelled down to watch the event. The take-off was spectacular, the noise was deafening, emotions were running high…” 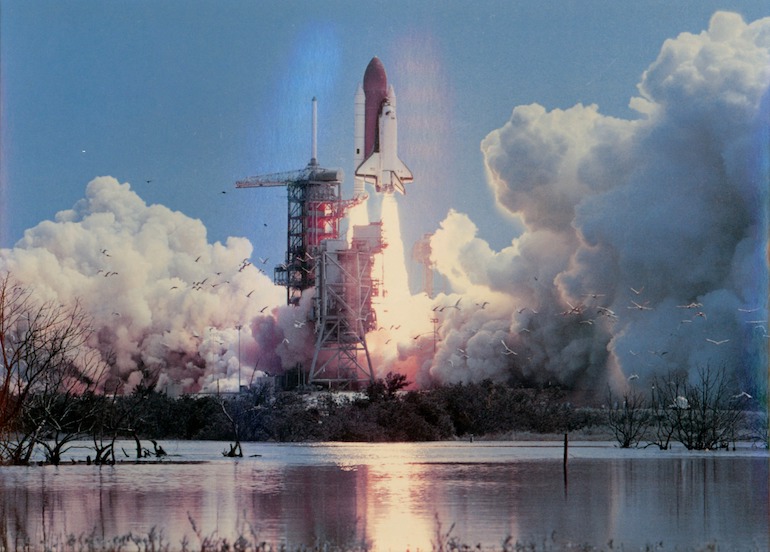 Lynch-Bages’ journey into space actually began a few months earlier. In Autumn 1984, Jean Michel Cazes was at his office when he received a phone call.

At the other end of the line, the famous fashion designer André Courrèges asked him an unexpected question: “would you like to send your wine to the moon?” Courrèges was in contact with the astronaut Patrick Baudry, who would be the first Frenchman to fly on the American spacecraft a few months later.

Originally from Bordeaux, he is a passionate wine enthusiast and wanted to showcase the region and city where he grew up by taking a sample of his production with him into space. Jean-Michel Cazes and Patrick Baudry immediately got in touch: “I organised Patrick Baudry’s visit to Lynch Bages.

The astronaut’s time was running out, so I sent a helicopter to pick him up where he was staying in Southwest France. Patrick spent the day with us and told me about his idea. His stance was very clear: the idea wasn’t to do a publicity stunt for the brand but to do Bordeaux and its wine justice, the latter being the region’s flagship product,” recalled Jean-Michel Cazes. 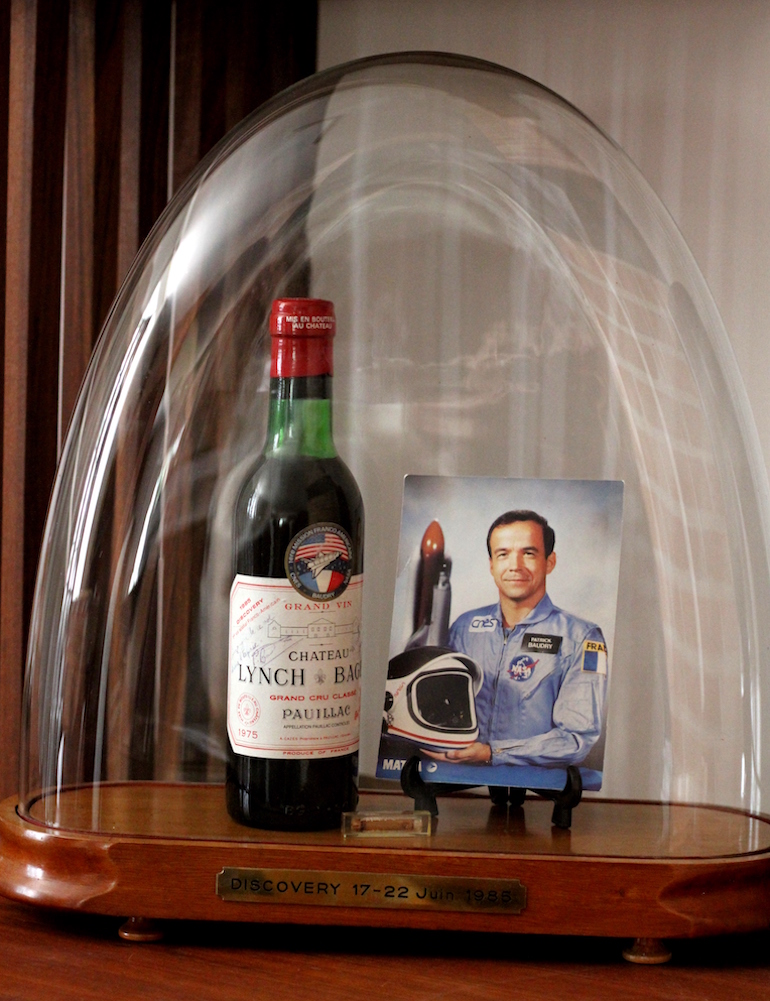 For the next several months, the two men stayed in touch. Baudry went back to Texas to train at the Houston Space Center. The Frenchman tried to convince the NASA officials to let him carry a half-bottle of wine and several vine leaves in his luggage as a souvenir.

His wish was granted! Jean-Michel Cazes immediately took off for Houston to hand-deliver these items during a memorable dinner: “We spent a lovely evening together in the splendid ‘Rôtisserie for Beef and Bird’ owned by my friend, Joe Mannke, who has one of the finest wine menus in the United States. I gave Patrick the items that he would take with him on his trip and he invited me and my family to attend the launch in Florida.” A few weeks later, Patrick Baudry took off for his mission with a half-bottle of 1975 Lynch-Bages and a few vine leaves from the estate.

This was a real source of pride for him: “I carried on board one of the finest examples of human expertise and one of the most marvellous jewels the planet has ever produced. And this was before Coca-Cola was sent to Space! I fought hard for this, so that the result of the efforts, hard work and dedication of my friend Jean-Michel Cazes would embark on the most beautiful faraway trip!  I have never felt more connected to the planet,” he said, visibly moved.

On Saturday 22 June 1985, while the Discovery spacecraft and Patrick Baudry were travelling around the planet, the Fête de la Fleur by the Commanderie du Bontemps de Médoc et des Graves took place at Château Cantemerle. During his welcome speech, the Grand Maître, Henri Martin, surrounded by the Order’s dignitaries pointed his finger towards the sky: “the first wine in space is flying over our heads tonight. And it’s a Bordeaux wine!” Two days later, on 24 June, it was already time for the Discovery spacecraft and the half-bottle of Lynch Bages to return to earth, after travelling around the world 110 times!

To celebrate the success of their mission, Patrick Baudry and his fellow crew members received a grand entrance in Pauillac in September 1985: “they were given a triumphant welcome. There was a musical parade in the streets.” The astronauts were then invited to Lynch-Bages for a magnificent dinner in the château’s barrel cellar and were inducted by the Commanderie du Bontemps.

What about the bottle? It is now back in its homestead, where it is proudly displayed in the reception area. It has never been opened and still holds all the secrets of its space odyssey!

Quotes by Patrick Baudry are taken from his website.