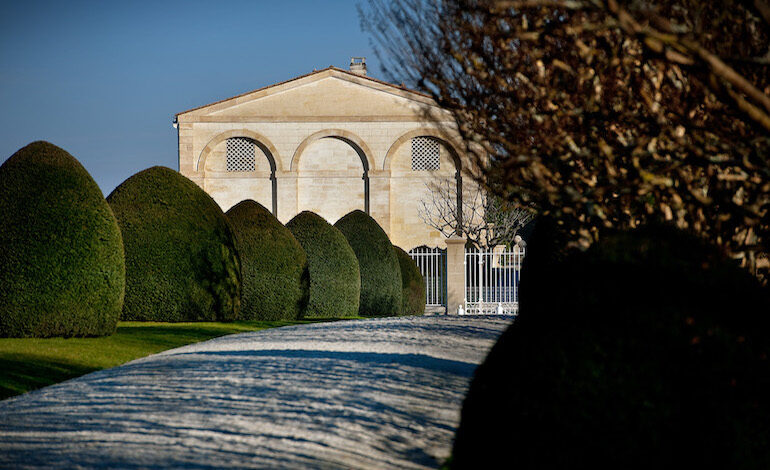 Since 1945, Mouton Rothschild has maintained a cherished tradition. Every year, the estate owners choose an artist who is given complete freedom to design an original vintage label. This tradition has contributed to the legend surrounding this unrivalled wine. Julien de Beaumarchais de Rothschild was kind enough to talk us through 10 remarkable labels.

Our labels are divided into two sections: the top section contains a reproduction of an original artwork, which changes every year; the bottom section contains the Château’s identifying information which, apart from the date, never changes.

Putting an artwork on the label symbolizes our belief that a great wine is also a work of art, in the sense that both can transport you to another world. But the fact that this artwork changes every year also reminds us that, even if the wine always has its distinctive character, defined by the excellence of the terroir and of those entrusted with it, it nevertheless varies from vintage to vintage.

How did this tradition of guest artists come about, and how do you choose the artists?

It all started in 1924. The first time that the wine was bottled at the Château, which was a revolutionary move in the era, Baron Philippe de Rothschild, who had always been involved in the art world, invited cubist designer Jean Carlu to create the label. But that incredible idea may have been a bit too avant-garde, and it did not catch on immediately. It was not until 1945 that Baron Philippe definitively established the tradition of having a new guest artist for each new label, which would then become the visual signature of Mouton and of the vintage. The artists invited to design labels for Château Mouton Rothschild are given total creative freedom, but they often gravitate towards certain themes: vines, the pleasure of drinking, and the ram, the emblem of Mouton. 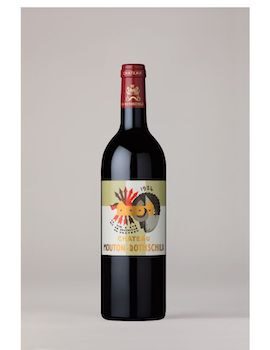 Baron Philippe de Rothschild took the reins of Château Mouton Rothschild in 1922, at the age of 20. The 1924 vintage was a triumph for the estate, marked with a special commission from poster designer Jean Carlu (1900-1997) and with the announcement that the wine was going to be bottled exclusively at the Château. That revolutionary move signalled a real departure from established practices. The 1924 Château Mouton Rothschild label is one of the finest examples of the cubist influence in the field of applied arts. 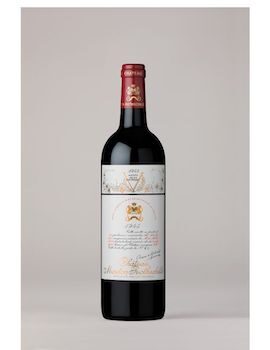 To celebrate the Allied victory, in 1945 Baron Philippe de Rothschild decided to adorn the Mouton Rothschild label with a reproduction of an original artwork: he wanted a symbolic design that would highlight the restoration of peace and the renewed sense of hope. He gave the commission to a young French artist who was still virtually unknown at the time, Philippe Jullian (1921-1977). Philippe Jullian presented Baron Philippe with a number of ideas, and he chose the “V” for Victory, which Churchill had turned into a rallying cry for the free world over the previous five years. 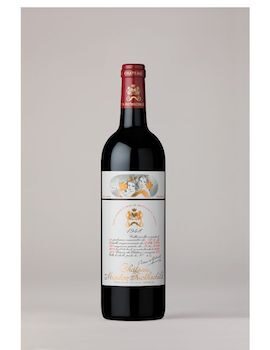 For the first time, Baron Philippe de Rothschild invited a woman, French artist Marie Laurencin (1883-1956), to design the Mouton Rothschild label. She produced a sketch of two young followers of Bacchus, imbuing them with that uniquely childlike sense of gravity which is a recurring feature of her work. 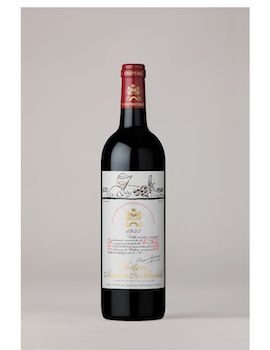 Enticed by Baron Philippe’s project of inviting a new artist for each vintage, Georges Braque (1882-1963) volunteered his services to create the label for 1955 Château Mouton Rothschild. He produced a drawing which matched the precise dimensions of the label, using a single colour to evoke both the vines and the wine: a magnificent vintage celebrated with the elegant simplicity of a truly great artist.

As the first internationally renowned artist to design a label for Château Mouton Rothschild, Georges Braque launched a trend and was soon followed by some of the greatest artists of the century. 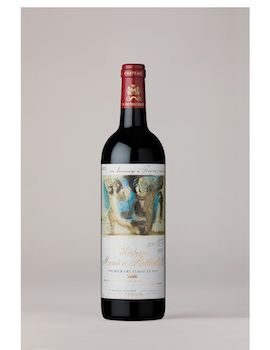 The label of the 1973 vintage pays homage to Pablo Picasso (1881-1973) and his artwork. Baron Philippe de Rothschild chose the painting entitled Bacchanale, from his personal collection. Picasso drew inspiration from a recurring motif dating back to the classical era to create his vision of Bacchic celebrants, women in a trance-like state performing a ritual dance in honour of Dionysus-Bacchus, the god of wine and theatre. 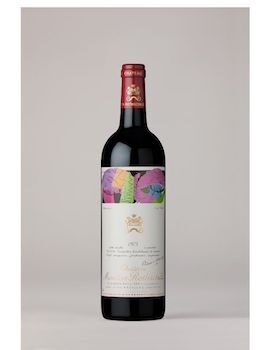 Andy Warhol (1930-1987) started out as a commercial artist in an advertising agency, and went on to become one of the leading figures of Pop Art, a movement which he himself defined as the “art of making the ordinary extraordinary”. Working, as he often did, with classic photographs of his subject, Warhol combined photography, collage and ink to create his design for the 1975 Mouton Rothschild. Blending humour and gravity, the piece juxtaposes the various faces of Baron Philippe de Rothschild. 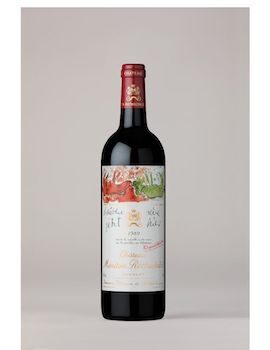 German artist Georg Baselitz (b. 1938) painted his first “upside-down” work in 1969. He would use this technique throughout the rest of his career, explaining that it enabled him to establish a “new distance” between artist and subject. In the process, and without ever abandoning the figurative tradition, he initiated a real revolution in perspective.

His inverted rams for 1989 Château Mouton Rothschild associate the traditional Mouton emblem with the defining event of that year: the fall of the Berlin wall. “Drüben sein jetzt hier”, the painter captioned his work: “Over there is now over here”, echoing the iconoclastic sense of freedom which defines his work. Along with the 1945 vintage, this is one of the rare examples of a label which explicitly refers to the events of the year in question. 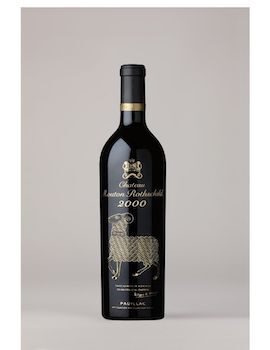 In an exceptional departure from tradition, in the year 2000 Baronne Philippine de Rothschild did not commission a new work from a painter. Instead, the bottle itself became a collector’s item, adorned with one of the greatest treasures from the Mouton Museum of Wine in Art: the “Augsburg Ram”, a chiselled silver-gilt drinking vessel crafted around 1590 by German master goldsmith Jacob Schenauer.

In order to reproduce the refinement and lustre of the original artefact, and after months of research, a new technique of relief enamelling was developed, requiring custom-made tools and craftsmanship of utmost precision. The particularly complex method used to fire the gold and enamel imbued each bottle with a scintillating texture and an incredible capacity to “catch” the light. 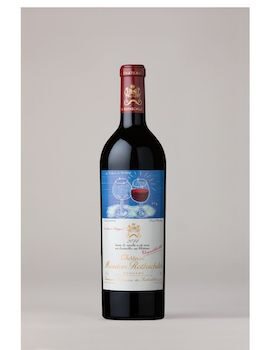 British artist David Hockney (b. 1937) was a close friend of Baronne Philippine de Rothschild, who passed away in 2014, and to whom his drawing pays tribute. Haloed by vibrant lines of force, signifying both emotion and wonder, two glasses, one empty and the other full, tell the story of the feverish expectation and constantly-renewed miracle of the birth of a great wine. 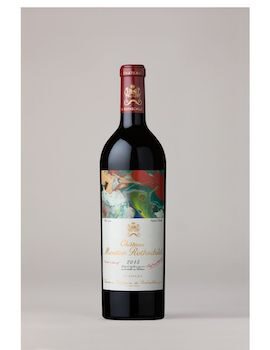 The commission for the 2015 vintage was awarded to German artist Gerhard Richter (b. 1932), a prodigious inventor of pictorial forms and techniques. His work for Mouton is the result of a process that he calls “Flux”, which is both random and carefully prepared. The technique involves using photography to capture colours in motion at a precise moment, in much the same way that a harmonious blend endows a great wine – always a living creation – with its sense of balance and fullness.